Michael Gardner, reports on his osteoarthritis, and seeing  Scenar Therapist.

“I am a 70 year old man suffering from severe osteoarthritis in both knees. X-rays show that my left knee has bone on bone and my specialist has recommended replacement of both knees. The pain in both knees was extremely high and little relief was gained from pain killers. I also need wheels support to walk any distance. My podiatrist suggested that I see Sue Mison and try Scenar Pro therapy. After several treatments the severe pain was greatly reduced.  As a result of the treatment I am in less pain, have more mobility, and take fewer pain killing tablets. As a matter of interest I expect to have knee replacements in the near future.  Regards, Michael”. 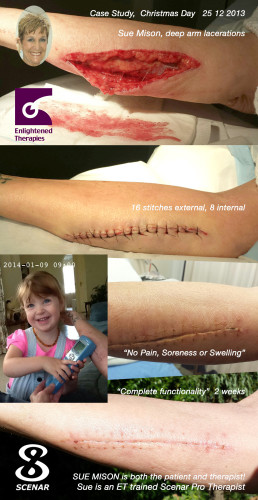 Huge deep laceration injuries to her right forearm were treated from the first day and the results were very gratifying – “No Pain, No Swelling, Super Fast and Full Recovery in just two weeks”

On Sunday the 11th of March, Yodhi, a beautiful Pug injured her spine. Owner, Leesa, took her to the vet and had an x-ray done, discovering she had displaced her spine at level T11 through to L1. They suggested Yodhi be operated on, as she would not be able to walk again. It was mentioned that she may need to be euthanized.