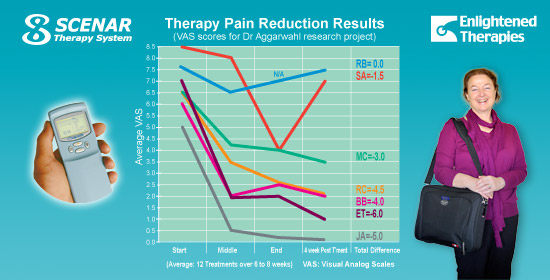 Over a 3 month period, 8 patients were treated, using mainly Scenar Pro level 1 and some Scenar Pro level 2 protocols. All the patients had a clinical history, from 3 to 30 years, of long term chronic pain, and all had not responded to other treatments such as Medication, Physiotherapy, Acupuncture, Chiropractic and Anaesthetic blocks. They had been under the care of a major pain centre in Sydney. Ages ranged from 48 to 76 years. All suffered from at least one other condition such as diabetes, high blood pressure, depression, schizophrenia, recovering heroin addiction. Each case was complicated as medication was being used for these conditions also.

We started with each patient filling in a consent form and liability waiver. For our assessment they completed the Visual Analogue Scale (VAS) and an SF-36 General Health Questionnaire at the start of treatment, at the midway point, at the end of treatment, and 4 weeks post treatment.

Proposed therapy regime was for the patients to start with 3 treatments for two weeks, 2 treatments for 2 weeks and then 1 a week for 2-4 weeks. Especially for the two elderly people in the trial, 3 treatments a week was very difficult for them to attend so we had to treat over a longer period with more space between treatments than was ideal.

In summary the results were very encouraging,

Ideally, for chronic pain sufferers we would recommend a second 12-14 treatment cycle, 3 months after the completion of the first, or beginning again if the patient began to experience an increase in pain. This was not done.

Below is a short summary of each patient.

The VAS table below with measures prior to the start of treatment, the middle, prior to the final treatment and then 4 weeks after the completion of treatment gives an indication of the changes in the levels of pain as perceived by the recipients of the SCENAR/ENAR treatment. It is interesting to note that pain reduction continued to improve post-treatment in half of the entire group.

JA reported experiencing pain levels up to VAS9, but not at any time when at the clinic. He was on methadone and treatment for schizophrenia. His first treatment suggested a good prognosis as numbers fitted into 3 corridors of activity and there was only one presenting painful zone. He responded very rapidly and by the eighth treatment reported no pain. Four weeks after treatment he had no pain.

Despite having numerous zones of pain BB had a very good prognosis, as all corridors were active in her at her first treatment. She responded very well with constantly changing dynamics and 4 weeks post treatment had maintained the improvement. Her use of painkillers had stopped by the 11th treatment. In my opinion BB would still benefit from another set of treatments or/and from having her own personal device and a MTB blanket. This is because she is 75 years old, has numerous relationship problems with her spouse and children and had suffered chronic pain for 40 years.

As SCENAR protocol is always to treat the painful point first we never treated RC’s chronic back problem as she had a fall 18months earlier and still suffered from serious shoulder/ arm pain from that. RC’s initial readings suggested underlying problems as her final zeroing numbers, on the shoulder, were extremely high at 250+. She made steady progress, but she could benefit from another series of treatments or from having her own device if motivated enough to self-treat.

Initially her numbers only fitted into one corridor, being exceptionally high. Treated specific points initially such as C7 and coccyx as these were presenting as most painful sites. These sites were slow to resolve, but by treatment six SA reported no pain at these sites. We continued working on the neck and jaw area with initially a good result, but not sustained post treatment. SA enjoys a very active lifestyle and I felt she wasn’t comfortable with the treatment process, which excluded us from applying some of the levels of treatment. She had a strong need for activity and would not use the MTB and didn’t want to slow down.

RB received no change from the treatment despite her numbers being quite balanced. Her left arm and hand had the highest numbers, but would resolve fairly quickly during treatment. By T5 I felt her condition wasn’t necessarily physical, but stemmed from a very deep, core issue. We continued with treatments in order to finish the program. She did enjoy the treatment.

Had multiple sites and at initial treatment only occupied two corridors. At T6 occupied 4 corridors. As MC is self motivated I loaned her a personal ENAR device over the last two weeks, as we couldn’t continue the twice-weekly treatments due to my schedule. Unfortunately, she had two falls during the treatment course both at times we’d made significant progress. She felt it helped her a lot. MC is another who I felt could benefit from another series of treatments or/and from having here own ENAR and Blanket. She liked the therapy and feels a slight, sustainable improvement after each session.

Responded extremely well to treatment and had 3-4 corridors active throughout the course of treatment. Reported fewer headaches and less pain. Also, she reported being clearer and more alert mentally which I also observed. Only completed 7 treatments due to husband’s illness. Reported very little pain when I followed up over the phone and continued to feel mentally alert and emotionally strong. Her bedwetting had stopped also.